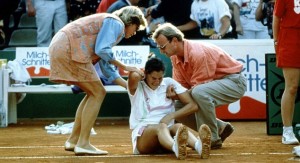 We are starting a series of what-if posts.

Well, any story which involves two things. One, a freak accident or an unnatural death or any extremely unlikely or rare event or set of circumstances, which we normally don’t expect in life. Secondly, the event should have significantly altered the trajectory of that sport. This would have been possible, only if the story involved a player or team, which could possibly lay claim to all time greatness.

In a nutshell we are looking at stories which still keep sports fans wondering about what could have been.

We will try and guesstimate what could have happened otherwise.

The state of affairs when the stabbing happened

A common sight. Seles beating Graf for the title

Starting with her triumph at the French Open in 1990 to her win at the Australian Open in 1993, Monica Seles won 8 out of the 12 Grand Slam events on offer as compared to 3 for Steffi Graf. At one point, she had won seven of the eight majors she played.

This effort earned her the world no one ranking and relegated the German to a distant second position. Monica was on top of the world at the age of 19 and getting better. Steffi Graf’s best days seemed to be behind her.

After the 1993 Australian final (Monica’s last Grand Slam prior to the incident), Steffi was in tears. She sobbed “I’m a mess.”

What happened after the stabbing?

Monica stayed away from the game for a long time, damaged physically and scarred mentally. And when she returned, Seles was hardly the player that she once was. She managed to capture just one more grand slam title, ending up with a total of 9 – not enough to put her in the GOAT – ‘greatest player of all time’ discussion.  A sporting travesty if ever there was one.

Steffi Graf’s career on the other hand took a sharp u-turn and charted another course of total dominance. She went on to win 10 out of the next 15 grand slam events and added another one in 1999 to end up with 22 in total – good enough to be second on the all-time list and gain consideration for the title of GOAT.

The case for Seles

Seles was young – 19 years old, and the next set of champions – the Williams sisters and Martina Hingis were not even on the horizon. Graf was the only threat to her domination, a player she had subjugated everywhere except for the Wimbledon lawns. Steffi Graf’s game remained the same throughout her career. There is little evidence to suggest that she could have added new weapons to her arsenal to counter her grunting adversary.

Most women champions tend to have longer careers. Seles’ was a cerebral player and her game wasn’t based on athleticism or brilliant shot-making – gifts which are prone to erosion with age.   Seles could have easily stayed at the top for another 8-9 years. Remember, that the mid 90’s were a fallow period for women’s tennis

What could have easily happened? 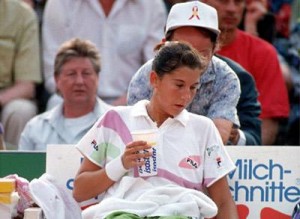 In a best case scenario for Seles, she could have won at least the same no of grand slam events that Steffi Graf won over the next 4 years – 10 in total. She would have then had 18 slams at the age of 23. She would have still been fairly young and good enough to be one of the top players in the game for at least another 5 years. Her experience, combined with her mental fortitude and sheer will to win (something she had in abundance since birth) would have kept her at the top of the women’s game. She wouldn’t have remained as dominant as she previously was but still good enough to win a grand slam title a year.

She could have most likely tied with Margaret Court Smith as the player with the maximum number of grand slam singles titles. And she would have improved enough on grass to win at least one Wimbledon title.

Even by a more conservative estimate – factoring in a few injuries and assuming she had tougher competition from Steffi Graf, an average of one grand slam every year over the next 8-9 years (till she got to 28) would have been easily achievable for her.

Like Rafael Nadal, she would have remained a perennial favourite at the French Open and ended up with at least the same number of French titles as Chris Evert – 7 in all.  She would have also matched the American – as well as Martina Navratilova –  in total grand slam titles won – 18 in all.

These victories would have reduced the title count for Steffi Graf by a fairly significant number – substantially reducing her greatness quotient as well.

As a result of this redistribution of grand slam titles, Monica Seles would have replaced Steffi Graf in the list of players contending for GOAT- women’s tennis greatest champion.

And that is my answer to our ‘what-if’ question.

Important disclosure: I was a die-hard Steffi Graf fan in my teenage years. I didn’t endorse what Guenther Parche did, but I was overjoyed when the German started dominating women’s tennis again. But I acknowledge that Seles had a measure of Graf and would have probably surpassed her in the all times stakes.

This was originally written in 2008 for the ACommonFan blog.Published here with some changes.