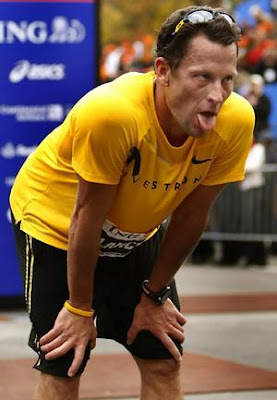 Seven time Tour de Champion Lance Armstrong has declared his intention to get back in the saddle and mount a challenge for his 8th title.

I am absolutely delighted by this – he is the only reason that I have bothered to watch an event that I have boycotted off late. And if he really gets back, I will start watching the race once again, I promise.

I am still not sure if Lance will be there as a competitor when the race is flagged off from Monaco next year.

This because in doing so, he will put his entire legacy at stake – and going by the kind of legacy that he has already established that’s risking a lot.

What if he fails miserably – the doubters will have a field day – ‘he was successful earlier as the doping norms were lenient and he won with the aid of chemicals and now that they are stringent he cannot do the same and hence cannot win’. His position as one of the greatest sportspersons ever and probably the greatest cyclist of all times will be considerably damaged. Unlike other greats like Michael Jordan who attempted ill-advised comebacks but still got away with it, the drug –tainted nature of cycling will ensure that Armstrong’s legacy takes a serious beating.

That also partially explains why the race organizers are not too thrilled about the comeback. They have been on a constant damage control exercise to maintain the sanctity and sanity of their sport with riders failing dope tests left, right and centre. They fear that if Armstrong fails one of the newer far more stringent tests the proud history of the tour and the future of the sport will be damaged beyond repair. They also stand to suffer if Armstrong’s comeback is a disappointment – for the reasons mentioned above.

So why is the great man making a comeback. What does he have to gain from it? Does he know no other life other than that of a cyclist? He has had success with his book and with the Armstrong foundation. He has sole ownership of the ‘maximum titles’ record and his attempt is tantamount to a comeback by the likes of Borg and Jordan (which was a failure) or a Sampras (which was called off)

I can think of only reason – he is attempting to do the exact opposite of what I am dreading. A successful comeback will put the doping theories to rest once and for all. It will also do a world of good for the Tour and the sport itself. And finally it will make Armstrong greater than the greats – the likes of Jordan and Sampras. He will stand alone in the pantheon of the greats as one who risked everything to make a comeback and prove the honesty of his efforts.

So what are his chances?

I for one will not bet against him. I will look forward to watching the Tour de France once again.

Update – Armstrong didn’t win the Tour but a third place finish didn’t do his reputation any harm. I continued to remain a fan and staunch supporter even as doping accusations flew thick and fast. And then in 2013, Lance Armstrong admitted to doping. I feel like an idiot now.