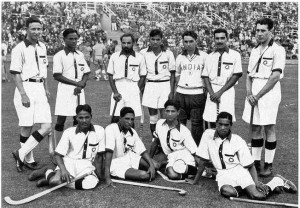 The Indian hockey team – Berlin 1936. I want to see more such teams.

This is my sports wish list – 15 things I would like to see as an Indian sports fan. No club loyalties here. Any of these achievements over the course of my lifetime would make me extremely happy. These include team and individual achievements. For me they are on par with India’s greatest sporting achievements so far. The hockey titles, Anand’s world title win over Kramnik, the cricket world cups, the All England titles, Bindra’s Olympic gold etc etc.

I have considered all the sports that I have followed over the years. If some sports are missing, it is because of one of the following reasons.

We have already scaled Mount Everest in this sport. A case in point is shooting where we have won numerous world titles as well as an Olympic gold. Nothing can match the joy that Bindra gave me.

The sport doesn’t count for much and therefore any kind of success wouldn’t mean much. Curling and bobsledding for example.

I am not too attached to that sport (with due apologies) and don’t really care about it too much. And trust me, I follow and watch a lot of different sports and am attached to most of them.

I have been scarred by some of the things I wished for in the past. I wanted an Indian to own a premiership side and ended up getting Blackburn and Venky’s. We all know the horror story that followed.

I want some of these more than the others and therefore the list is in reverse preference order. If someone (read God or a sports loving bookie or mafia don) is granting me a wish, they know which one to select.

Three Asians have made the semis including one Chinese, Dong Jinhui (Trust the Chinese to somehow excel at everything). Our greatest hope, Pankaj Advani, tried for a few years, became the first Indian to rank in the top 64 but lost twice in the qualifiers and gave up.

14) India winning a kabaddi gold at the Olympics – In the past, we have often made fun of sports like Kabaddi and Kho-kho. While the latter isn’t going anywhere, the former has gone from strength to strength. The other Asian countries have picked it up and improved significantly. There is a world kabaddi league and the first edition of the Indian kabaddi league was a roaring success.

I want this truly indigenous sport to continue growing, spread to all corners of the globe and one day be selected for the Olympics.  And then I want us to win gold. Kabaddi saved our blushes in the 1990 Asian Games. I hope it gives us the pride of an Olympic gold one day.

13) An Indian boxer becoming a professional world champion – This is in my list because I love boxing. I follow professional boxing, read old boxing stories and watch all the good movies. The rise and then the subsequent fall of Indian boxing over the last few years have been one of my sporting highs and lows respectively.

I have followed Manny Pacqauio’s (of Philippines) meteoric rise to become a professional world champion and one of the best boxers of his generation. His success gives me a little hope. But few Indian boxers have professional dreams and the handful who have tried (Dharmendra Singh was one) have achieved zilch. But what the heck. This is a wish list after all.

12) Vishwanathan Anand regaining the world title – As I write this, Vishy Anand has beaten Magnus Carlsen to equal their world series at 1.5 points each. He was crushed the last time round and this win gives all of us hope – that the final result might be different this time. Will be off the mark (with the wish list) sooner than I thought.

This one is important because it impacts Anand’s legacy. Blitz and rapid titles are great but it’s the classic format which matters in the legacy stakes. Anand was humbled early in his career by both Kasparov and Karpov. He never got a chance to redeem himself fully, although the win over Kramnik gave him bragging rights amongst his generation. Carlsen is the highest rated player in history (currently at 2863 and had a peak of 2882 as compared to Kasparov’s peak of 2851) and beating him will cement Anand’s place in the Mount Rushmore of chess.

11) An Indian badminton player winning the Olympic gold - We already have two All-England singles titles so asking for an Olympic gold makes me look greedy. But I feel I have a right to do so given the rich seam of talent that we are enjoying in Indian badminton. Moreover, the Olympics come once every four years and consequently are more prestigious in my book. I hope I also have the pleasure of watching a Chinese getting beaten by the winning Indian.

10) An Indian “fast” bowler taking 30 wickets in an overseas series – Our spinners don’t open the bowling anymore and we have had some fine individual performances from our pacers; match winning ones as well. But with all due respect to Kapil Dev, Javagal Srinath and Zaheer Khan, we haven’t had a dominant series (overseas) from a genuinely quick Indian fast bowler. The kind of series Mitchell Johnson had in the Ashes and the kind of performance, we have watched the great Pakistani quicks have with envious glances all these years.  For once I would like a case of “neighbours envy, owner’s pride”.

9) An Indian winning a formula one race – I become a fan of this sport after watching the likes of Senna, Prost and Mansell do battle. I stopped watching after Schumacher made it a one driver sport. I haven’t gone back since. (Somehow, it feels as if the cars matter much more than the drivers and I don’t like it that way). Well, except for the time, Narain Karthikeyan got a drive and when, Force India came into being.

I want another Indian in the sport so that I can start watching it again. And I want him in a great car so that I can watch an Indian win a race.

8) An Indian winning a grand slam singles event in tennis– Tennis has given us a lot of joy over the years. But, while the standard of our doubles players has reached world beating level, our singles play has declined. Ramnathan Krishnan’s semi-final efforts of 1960 and 1961 are yet to be matched. We haven’t had a quarter finalist since his son Ramesh retired. And Somdev and Yuki Bhambhri have flattered to deceive.

But I am encouraged by the feats of Kei Nishikori and Li Na (see the pattern building with the Chinese). The game isn’t all about power after all. The sport continues to be immensely popular in India and I hope to see an Indian champion someday.

7) India winning the Thomas or Uber Cup – All these years, just making the main draw of the Thomas and Uber Cups was a real big deal. Even the great team of Prakash Padukone, Syed Modi and Vimal Kumar lost all their matches in the main round. There was no way we could beat the Orientals or the Danes.

But as mentioned earlier, Indian badminton has never had it so good. We came within one match of winning the Uber Cup earlier this year. I get greater joy in team achievements as compared to individuals ones and I really want us to win one of these titles by beating the Chinese in the final.

6) India winning the Davis Cup – Another team achievement in my wish list. This tournament has already given me some of my most memorable sporting moments. My favourite ones being the victory over Australia in Kooyong and the win over France in Frejus.

But these wins were followed by drubbings at the hands of Sweden and Australia respectively. Sadly, we weren’t able to carry our giant killing act all the way. I also think about the lost opportunity in 1974 when we forfeited the final against South Africa.  A title has eluded us so far and that is what I want. I am certain that the title run will leave me with a bagful of great memories.

5) An Indian basketball player in the NBA – The NBA is my second favourite sport currently and I would love to see an Indian in the best basketball league in the world. This looked almost impossible a few years back but there is hope now.

The NBA is doing a fair bit to make my wish come true, sending world class coaches to run clinics in India. In June, the 61st ranked Indian team stunned the Chinese (ranked 12) for their most famous victory. And in August, Sim Bhullar became the first player of Indian origin to sign for an NBA team. I don’t mind a Yao Ming style genetic experiment to “manufacture” an NBA calibre player.

But let me be clear on a few things. I am not interested in a player of Indian origin. I want to see a “100% Indian” player. Born here, raised here, learned the game here (whatever little they teach and however poorly they do it) and first made his name here. Someone who makes it on merit and not on a mercy plea to promote the premiership in India. I don’t care if he plays for a club I hate. Just one guy, out of millions, who has the right combination of skills, physicality, coaching, sponsorship, luck and mental toughness to go all the way.

3) India winning a test series in Australia or South Africa – This is Indian cricket’s version of the final frontier. We have had our chances in the past but the frontier remains unconquered. Other than these two series’, we have won everything else. I don’t care if we win another limited overs world cup or not. I don’t care about another victory over Pakistan either. I just want to beat the Aussies (or the Proteas) in their own backyard.

2) The Indian hockey team winning an Olympic gold medal again – One of my earliest hockey memories is the wooden spoon game in the 1986 World Cup between India and Pakistan. After an inauspicious start, I have witnessed Indian hockey hit new lows every now and then. We have slipped steadily – from the elite to the mid-tier, and are currently nestled among the also-rans of world hockey.

Thanks to the lack of footage, we don’t even have the comfort of re-living our glorious past. But I can handle a lifetime of hockey misery as long as I get to see the Indian team hit the high note, just one more time. Just one Olympic gold in my lifetime.

We might have just found our saviours in Terry Walsh and Roelant Oltmans. Together, they have lead the Indian team to an Asian games gold and a series win in Australia over a competitive Aussie side.

We are one of the worst footballing nations in the world.  We have a hard time qualifying for the Asian games. We are used to joking that the only way we can qualify is by hosting the world cup. Qualification will be the mother of all sporting fairy tales. It will finally give me a chance to wear an Indian jersey during the world cup. I don’t want to keep wearing the Brazilian one all my life.