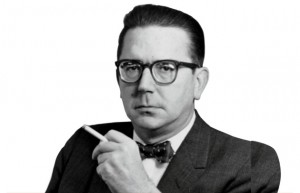 This is an interesting story about the legendary advertising man Rosser Reeves. I heard this in Dan Pink’s best-selling book, “To Sell is Human: The Surprising Truth About Moving Others” (it was an audio book). The author uses this to explain a persuasion technique called the contrast principle.

The precise details of the story are a little hazy and not verifiable as it has been retold a million times over the past fifty years. An acute case of Chinese whispers. Nevertheless, it makes a great point and will make for a wonderful after dinner story.

Here is the story. Repeating it word for word. I don’t want anybody complaining that I changed it too.

One afternoon, Reeves and a colleague were returning after having lunch in Central Park to their office in Madison Avenue. On the way back they saw a man sitting in the park begging for money. He had a cup for donations with a handwritten cardboard sign that read: I am blind.

The cup contained only few coins as the blind man’s attempts to move others to donate money were meeting with little success. Reeves thought he knew why and told his colleague that he can dramatically increase the .amount of money in the cup by simply adding four words to his handwritten cardboard sign. The colleague, who was sceptical challenged Reeves to do so.

Reeves went to the blind man, introduced himself and explained that he knew something about persuasive communication that can move others and offered to change the sign by adding just four words, which will make people stop and donate thus increasing the money in his cup. The beleaguered man agreed.  Reeves took a marker and added his four words and stepped back joining his colleague to watch.

Within a few minutes, a few people dropped coins in to the man’s cup. More people stopped as time passed and some have even dropped dollar bills in the cup. Before long, the cup was running over with cash and the once sad-looking blind man feeling his cup full with cash beamed.

What are the four words that Reeves added?

It is spring time and

It is springtime and I am blind.

The contrast principle works amazingly well as a persuasion principle. More on that in another post.

Psychology, Shareable
2 comments on “When Rosser Reeves made an advertising pitch for a beggar”