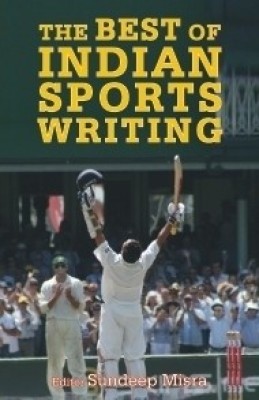 Recently, I read Rohit Brijnath’s beautiful piece written on Philip Hughes’ tragic death. Suddenly, I was missing his writing and pining for more of him. Soon, I realized, that I wasn’t alone – many of my friends had similar yearnings.

I fell in love with sports in the late eighties and nineties, before the days of the internet, when other Indian kids like me waited for the next morsel of quality sports content like a hungry man in a soup kitchen. It was almost always provided by the Sportstar and Sportsworld – two wonderful publications with an army of great writers.  I grew up in Ranchi and had no access to the Hindu or the Calcutta dailies.

Rohit Brijnath was one of those writers. I read him in Sportsworld and then in the Sportstar.

If you belong to that time, then I have a treat in store for you called “The Best Of Indian Sports Writing”

The selection by Misra is delectable. Like a Master Chef at a Michelin restaurant.

Misra’s selection pays homage to the long form of journalism, an unencumbered style which was facing extinction until being revived recently by the likes of the Blizzard for football and the Night Watchman for cricket. It is the style where the writer writes to his heart’s content and isn’t hard pressed for a 400 word limit.

As he writes in the foreword, the select few are of the kind who like to bowl a forty five over spell. Not for them a four over burst.

Fans of hockey can look forward to the Hindu legend, S Thyagarajan, who gives us the tragic final of the 1982 Asian games. You can sense the writer’s pain as he recollects a day which still sends a chill through his spine.

Then there is the Sportsworld pair of Rohit Brijnath and Mudar Patherya.  While the former still writes in Singapore, the latter is no longer a writer. Rohit re-establishes his credentials as India’s best tennis writer with a piece about Leander’s bronze at Atlanta. Mudar’s article is about Eden Gardens in which he chronicles the myriad varieties of fans in the stadium. Historically, he informs us, this number has touched a high of thirty six.

Leander Paes has the rare distinction of having two articles on him. The second comes from former player turned journalist Sukhwant Basra.

Sharda Ugra will move you with the poignant tale of cricket in the Kashmir valley. And Shantanu Guha Ray will inspire you with the story of Franz Gastler, the Harvard grad who’s single-handedly taken the girls of a tiny village called Rukka in Jharkhand all the way to the Indian national football team.

Arindam Basu uncovers the really story behind India’s failure to participate in the 1950 football World Cup and lays to rest all the myths about barefoot football.

KP Mohan writes about PT Usha, the Payyoli Express which refuses to stop. You will ponder some more over Usha – and every other Indian who has come close to an Olympic medal – once you read  Kamesh Srinivasan’s story about Abhinav Bindra’s journey to Olympic gold. This is what it takes.

If you haven’t stopped talking about Leander’s Davis Cup heroics and haven’t thrown away your old sports magazines, then this book is a must have. It is worthy of being called India’s answer to the Best of American Sports writing.

You will treasure it like your old school yearbook. Reading it is like revisiting your childhood home and finding old friends – the watchman who took you to school and the old maid who fed you while you ran around the house.