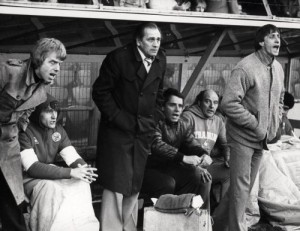 This is an unbelievable story about Johan Cruyff.

In addition to being one of the greatest footballer players of all time, Cryuff was also a football visionary whose self-confidence was second to none. He was sure he knew what everybody had to do on the football pitch all the time. From a very early age, he was constantly talking to his team mates, telling them where to stand, where to go and what to do.  But he was a genius who more often than not ended up being right. This story is one of the highlights of the Cruyff legend

In 1980, Cryuff returned to Ajax – his first club – after wrapping up his career in the US. He was appointed a technical advisor at the club, a role whose responsibilities were probably not even clear to the board. Ajax were then struggling in mid table

The manager, a young Leo Beenhakker, was informed of this decision in a very casual manner by the Chairman, Ton Harmsen. He was told that he could consult Johan Cryuff on technical matters.

Neither Beenhakker nor Harmsen would have anticipated what Cryuff was going to offer in the next game.

Ajax scored the opening goal, but they were soon being outplayed by their visitors, FC Twente. The visitors scored thrice to go 3-1 up. Things looked bleak for Ajax and their manager looked completely clueless.

Cryuff had been watching from the stands all this while. With around half an hour to go, he couldn’t bear to watch anymore.  And so he got up.

But he wasn’t getting up to leave. He got up to do something about what he was seeing on the pitch.

Watch the video now. It’s in Dutch but doesn’t matter. See what Cryuff does around the 3 minute mark in the video

In an astonishing move, Cryuff quickly made his way down, opened the fence gate and sat down on the bench; next to Leo Beenhakker.

He hadn’t gone down to proffer his advice to the manager. He was there to take over from him. Immediately.

Beenhakker was stunned to see him there. And by the time he recovered and got a sense of what was going on, Cryuff had already taken over and made wholesale changes. He sent on Frank Rijkaard, adjusted the formation and started shouting orders to everyone, telling them as had been his wont, what they should be doing on the field. 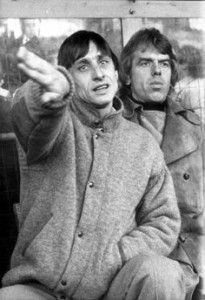 The players reacted as if they had been waiting for Cryuff to turn up and tell them what to do. They followed his instructions and quickly turned the game around.  Eventually they ran out 5-3 winners.

Whether the tactical changes did the trick or whether the players were simply inspired by the sight of Cryuff? Nobody knew and nobody cared.

Johan Cryuff had shown his genius once again. In a manner that nobody had ever done before.

Leo Beenhakker on the other hand, looked like a total chump.

His expressions in the post-match interview (see the second video) clearly show his state of mind. 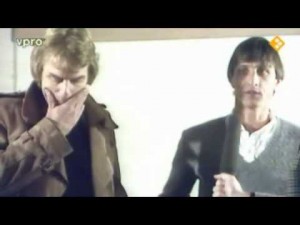 This partnership clearly wasn’t going to last. 4 months later Beenhakker quit. He later said that he should have should have kicked Cruyff in the backside the moment he arrived and sent him back to the stands.

Luckily for Beenhakker, he recovered and went on to have a decent career as a manager.